The Breville BMF600XL milk cafe milk frother is a stainless steel milk frother for either heating milk (with some froth) for use in making hot or cold lattes or creating thicker froth for primarily cappuccinos. First impressions of the frother, with its Breville stamp of quality, we all know, and shiny steel finish says the BMF600XL is a trustworthy device which will be operating near about or at the top of its milk frothing class.

In the review of the Breville, I look at the fundamental features a machine in this class should possess  in usability, ease of cleaning, build quality and final quality and amount of the milky froth itself.

Read until the end to see if the designers at Breville need to “smell the coffee” or if we’ll be living in a bubble of warm accolades. Firstly lets pour over the importance of warm milk when making a latte.

Warm Milk and its Importance in Making a Latte

Milk is the most important ingredient of every espresso latte, after the coffee beans, themselves. If you are not using an espresso machine with its own steam wand read on. Milk makes up at least half of the latte and is important for the final taste of the beverage and the appearance, through latte art, which embellishes all of our hot lattes when we visit coffee shops. Fresh organic milk from healthy cows is always the go to milk for a great tasting latte.

Tips most baristas will give is in short: more fat, less heat. If you are using thicker and tasty fresh cream milk, you will need a standard heat of 150 Fahrenheit (65.5 C). Once you use the low fat milk options, you will need to increase the heat gradually a touch but not beyond: 175.

Some stand out features spring out about the Breville BMF600XL Milk Cafe Milk Frother. Holding up to 16 ounces of milk, this chrome looking beauty is larger than most frothers on the market. Handy guides inside the pitcher tell you the maximum amount of milk you should be pouring in, depending if you’re making froth or heating milk for lattes.

A topmost marking for hot chocolate, too is a useful measuring mark. In fact it should be said the device won’t work if there’s too much liquid inside.

To warm up milk for latte, fill cold milk to the appropriate marking and secure the lid. It all feels robust and well built. A well thought out door in the lid allows you to add cinnamon or chocolate powder as an after thought. A sturdy dial allows you to twist to your desired temperature which goes as high as 160 F. Press the center for start-stop … easy as can be.

The gentle whirring sound of the Breville BMF600XL Milk Cafe milk frother tells you the machine is on but won’t wake even the cat. After two minutes, the warm milk froth is ready. Bare in mind, though you cannot see the milk being mixed with steel models. The regular latte whisk doesn’t provide a lot of foam compared with the cappuccino disk.

On the box it claims enough creamy froth can be made for 3 cups. I would say there’s enough froth in one turn for 4 cups of cappuccino. Further good news is the frother jug can be easily placed in the dishwasher after use.

When milk froth pours out like meringue, you can definitely make enough silky white froth for four cappuccinos.

The Breville BMF600XL Milk Cafe Milk Frother really does tick all of the boxes. The temperature is accurate when steaming milk for latte or when churning froth for cappuccino. It’s dish washer proof and super easy to use at the click of a button.

In the looks department the gleaming, steel Breville would look at home among utensils of any stylish kitchen without dominating space. After all the device is 6.1 x 6.4 x 10.3 inches.  If there is a downside the steel look doesn’t allow you to see the milk actually frothing like some glass models – if that is a downside.

A definite upside of the BMF600XL is the quantity of froth produced. With its quick clean and turnover you could easily serve several people with cappuccinos or lattes within 5 minutes. The price of the Breville is higher than more inferior models in its class. But as the axiom goes: “you pay for what you get.” Check out the competitive price I found on Amazon (I may get a small commission for purchases)

Check out the best price I found on Amazon

Eddie loves blogging about coffee and the tech that makes the perfect coffee. He is an author and loves investigating different styles of coffee machine. 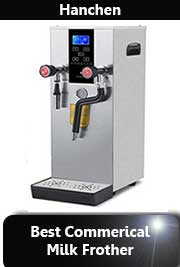 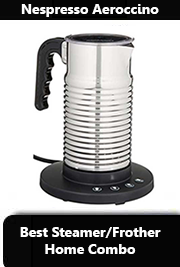 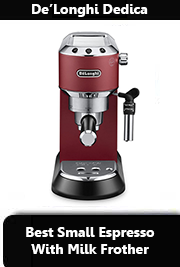 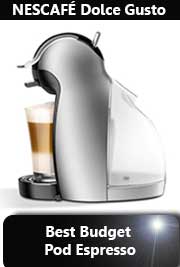 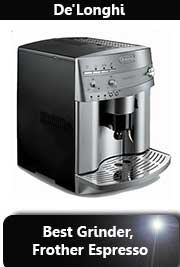